Fly to Rome and embark on MSC Spendida to enjoy an 8day cruise to Italy and France.

Living the dream in splendid style. Title Eco-ship MSC Splendida carries you in stylish luxury to the most desirable cruise destinations in the world, while being a beautiful destination in her own right. You’ll love the live music and the extraordinary variety of designer-themed bars and restaurants with many gourmet choices to explore, from authentic Mediterranean specialities to American steakhouse beef cuts. Complete the night with a world-class show in The Strand Theatre, a winning streak in the Royal Palm Casino or dancing in the Club 33 Disco. There’s also a vast array of sports facilities including four swimming pools, a jogging track, squash court and ultramodern gym.  After your exertions, you can relax in the MSC Aurea Spa with pampering Balinese massages, thalassotherapy, advanced beauty treatments, a Turkish bath, sauna, whirlpool and solarium.  Or sunbathe in the peace and privacy of the Top 18 sun deck offering stunning sea views, its own dedicated spa service and bar menu with complimentary fruit skewers; Kids and Teens can also enjoy fabulous facilities and clubs of their own. Nestling in the prestigious foredecks, there’s the exclusive MSC Yacht Club, a luxurious ship-within-a-ship with 71 spacious suites with its own Concierge Reception, 24-hour butler service, private Top Sail Lounge, pool deck and bar. With so much aboard, every day on MSC Splendida brings travellers of all ages new things to explore.
1

Flight Larnaca to Rome. Upon arrival transfer to Civitavecchia port. Embarkation on MSC Splendida. The ship departs at 19:00

The port city of Genoa is the gateway to Italy’s glamorous riviera. Wander down its winding medieval alleyways, take in historical, Piazza Matteotti, and admire a magnificent cluster of 16th and 17th-century buildings. Genoa’s heritage as a naval power is evident in La Lanterna, a historical lighthouse built in 1543. Beyond the city, romantic towns can be found nestled along the coastline, including the gelati-coloured Portofino.

Delight in an MSC Cruises excursion to picturesque Portfino, a famous fishing village on the Italian Riviera. Starting at Santa Margherita Ligure, you’ll take a short and leisurely boat cruise to Portfino’s shoreline where you’ll admire spectacular sea views and a glamorous yacht-filled harbour. Surrounded by verdant hills, Portofino is a fashionable playground for A-list celebrities and international VIPs. Stroll along the harbour, admire the gelato-hued houses, or enjoy a drink in a waterfront café.

Genoa makes for an unforgettable experience, and there is no better way to explore it than on a MSC Cruises Excursion. Wander the charming narrow streets of the old town known as 'carruggi' to reach the imposing Piazza de Ferrari area with the Palazzo Ducale. Discover the rich history of Genoa's aristocracy showcased in the elegant district of Via Garibaldi dating back to the Renaissance era with resplendent edifices that are UNESCO World Heritage Sites, such as Palazzo Bianco or Palazzo Rosso with remarkable art collections inside. On your way back to the port, don’t miss the opportunity to admire the 16th-century Palazzo del Principe, the superb Admiral Andrea Doria’s residence.

The old town of Genoa is an ideal MSC Excursion if you are looking to explore the city on foot. This pleasant walk through Genoa’s historic town center will take you around the city that once was a major commercial hub for all overseas traders. After a stroll through the carruggi, reach the main square named Piazza de Ferrari and marvel at Palazzo Ducale. Take a little break and taste some local Ligurian cuisine such as focaccia and bruschetta at the “Cisterne del Ducale”. Before returning to the ship, the tour also includes an external tour of the Cathedral of San Lorenzo.

On the spectacular coastline of the French Riviera lies Marseille. This atmospheric port city is known for its unique mix of grit and glamour, seen in its labyrinth of streets and historical architecture. Only a few miles from Marseille’s charismatic cafes and bustling Vieux Port, stunning cities are to be found. Visit Aix-en-Provence, birthplace of Cézanne, or take in the ancient beauty of Avignon.

The seaport of Marseille remains a must-see destination for its culture, colour, and atmosphere. Explore the port and its primary landmark: the Neo-Byzantine basilica Notre-Dame-de-la-Garde, constructed between 1853 and 1864. From the summit, you can take in incredible views over the city and the deep blue Mediterranean. Don’t miss a stroll along Marseille’s waterfront, past the aristocratic Borély Castle and Garden. See Longchamp Palace in the town centre before spending time in the old port.

Visit the southern French town of Aix-en-Provence. Explore the religious landmark of St. Saviour Cathedral, which was built over the remains of a Roman temple. Honouring the sun god Apollo, this richly decorated structure features Romanesque, Gothic and Baroque features. Next, enjoy a pleasant hike to the Four Dolphins Fountain and the Mazarin Quarter, home to honey-hued mansions from the 17th-century.

If you appreciate rich medieval history and sophisticated culture, visit ancient Avignon. This amazing city is home to the Palais des Papes, a UNESCO World Heritage Site boasting medieval Gothic architecture. A former residency to Popes of history, you’ll marvel at the building’s tapestries and frescoes. Afterwards, wander the mesmerising streets and have a spot of lunch in a French brasserie-restaurant.

Day at your leisure to explore and enjoy the megaship MSC Splendida.

The Italian port city of Syracuse is located in Sicily on the Ionian coast. The gateway to Noto and Ragusa, Syracuse is famous for its glorious sunshine, ancient heritage, and Baroque piazzas.

Noto is famous worldwide for its Baroque art and architecture masterpieces. The city is located along the slopes of Mount Iblei, characterised by olive groves and almond trees. After an earthquake in the late 1600s, the city was rebuilt by genius architects Rosario Gagliardi and Francesco Sortino amongst others, who created a unique masterpiece of Sicilian Baroque recognized with UNESCO World Heritage Site status.

Spend a day immersed in the extraordinary countryside and atmospheric baroque cities nominated as UNESCO World Heritage Sites for their rich artistic and architectural marvels. Begin this Excursion in the town of Ragusa, where you will explore the old town of Ragusa Ibla, known as the “Pearl of the Baroque” for its palaces, gardens and churches. The tour continues with a visit to Modica, known baroque palaces and beautiful squares lined with palms and home to world-famous chocolatiers. Before returning to the ship, the final stop will be Scicli. Visit the churches of Sant'Ignazio and San Giovanni, marvelling at their spectacular interiors, and tour the main streets and squares of the town.

Experience Syracuse as a local with a walking tour. Make your way to the Old Market, where you can taste plenty of Sicilian food such as cannoli, granita and brioche. Visit the ruins of the Temple of Apollo and then head to Corso Matteotti, the city’s most elegant shopping area. Syracuse is also home to stunning Cathedrals and the Abbey of Santa Lucia, home of a world-famous Caravaggio painting. To complete the tour, board a nearby boat for an inspiring tour by sea of the island of Ortygia, the historical heart of Syracuse.

Hot beaches, archaeological sites and vibrant markets await you. Located in the deep blue Ionian coast of Southern Italy, a cruise to Taranto will show you a city that has interesting activities for all kinds of people.

Founded by the Spartans in the 8th century B.C., Taranto was one of the most important city-states of Magna Graecia, and at one point even became the third most populated city of the classical period. The remnants of the ancient Greek and Roman sites and can be found in the Archeological museum.

Enjoy the sea and the sun on Taranto’s sandy shores: At the private beach, the Marina di Taranto, you will find all the ingredients needed for an enjoyable seaside experience. This exclusive excursion will be available from June to September.

Discover the many attractions during your cruise to Taranto , starting with the San Cataldo Cathedral, a 10th-century church dedicated to an Irish monk who lived and was buried there. Enter and marvel at the Baroque architecture and frescoes inside.

Or explore the larger region of Puglia and visit the UNESCO site of Alberobello known for the Trulli – conical-roofed limestone huts that are unique to this region.

Ostuni , "the white lady" stands on three hills in the area of Murge. It was an important Greek – Roman city in the first century AD. The picturesque medieval village with its white houses with winding streets and cobbled alleyways dominates the plains below. Don’t miss the visit to a typical oil mill with a tasting session of olive oil.

Day at your leisure to explore and enjoy the megaship MSC Splendida.

MSC Splendida ship arrives at Civitavecchia port at 07.00 Upon arrival transfer to airport for your return flight to Larnaca.

READY TO CRUISESpecial Deals for bookings until end of August 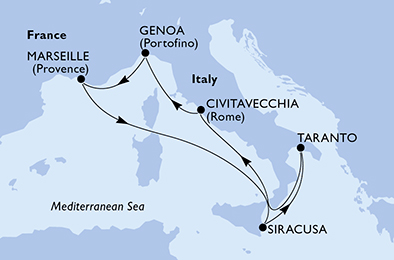 Be the first to receive our amazing deals & competitions!

We use cookies to ensure that we give you the best experience on our website. If you continue to use this site we will assume that you are happy with it.OKCookie Policy